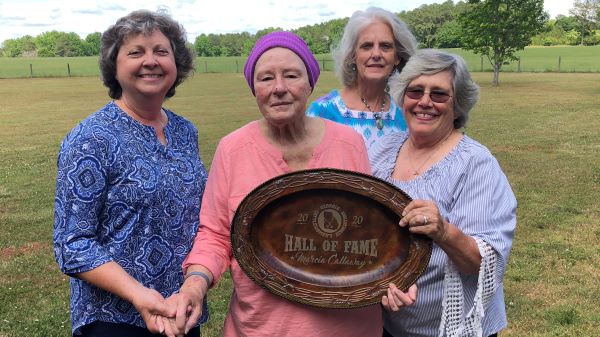 Marcia Callaway was the 2020 inductee into the Georgia Cattlewomen’s Association Hall of Fame. 72-year-old Marcia Callaway was originally supposed to be honored at the GCA convention in Perry in April before that event was postponed due to COVID-19. The event was eventually held May 28-30.

Marcia and her husband, John Callaway, are the owners of Callaway Cattle Company which is located in the Corinth area. The couple runs the seedstock operation on the same farm that has been in John’s family for over a century. John is a graduate of Hogansville High School and Marcia is originally from Tallapoosa, GA. They have been married since 1988. John says that when he first met Marcia she didn’t even own a pair of blue jeans but loved being in the country and soon developed a love for the cattle business.

Marcia was recognized for her many years of dedication, passion and service to beef industry in Georgia and the United States. She was elected the President of the GCWA in 2004 and served in that role for two years. She also served for a time as director of the American National Cattlewomen’s Association. During her two-year tenure as GCWA President, she implemented ways to promote the beef industry and educate consumers about it. She was instrumental in organizing the All-American Beef Battalion to feed troops at Fort Benning. The Georgia National Fair and the Sunbelt Expo were venues utilized to educate thousands of consumers about beef.

An advocate for the Beef Ambassador speech competition, she encouraged youth to participate in the program and worked to make the event more accessible for them. “Marcia has committed numerous hours to our youth encouraging them to know how to care for their show calves and to develop outstanding showmen skills,” according to her GCWA Hall of Fame nomination info. “Wanting youth to understand the beef industry, she has provided opportunities for their growth and development. Sitting in her favorite seat in the arena, Marcia spent hours observing youth exhibitors and designing ways to help them improve.”

Active in her local community, Marcia taught many 4-H club programs, assisted with rodeos sponsored by the Coweta Cattlemen’s Association and promoted and worked with her local beef cook-off. While serving as the Troup County Farm Bureau Women’s Committee Chairman, she distributed many “No Farm, No Food” bumper stickers. In 2013, she manned a beef exhibit at the Tallapoosa Visitors Center. She was a supporter of Extension and a volunteer leader. Upon completing the Extension Master Gardener class, she was elected President of the Coweta County Master Gardeners.

Getting more women involved in the GCWA was a goal of Marcia’s. She shared her love for the beef industry with many while encouraging their involvement. Thousands of beef promotional items have passed through her hands as she promoted the Cattlewomen and the beef industry. Being a knowledgeable conversationalist, helped Marcia share her message with legislators and consumers alike. Her leadership spread across the state and nation as she represented GCWA at numerous ANCW Conventions and mid-year meetings. She coordinated the ANCW Region II meeting in Dahlonega and chaired and served on many regional committees.

Unfortunately, soon after being announced as the GCWA Hall of Fame Inductee in the fall of 2019, Marcia was diagnosed with cancer and has been taking treatments to battle the disease since January of this year. An active member of the recently closed Corinth United Methodist Church, Marcia has always focused on her faith, her family and her purpose.